Collective exhibition
Architecture Of The Word

Collective exhibition
Architecture Of The Word

Slak_Aesthetics, Dima Retro, Kirill Kto, Petro_Aesthetics and Ivan Ninety are participants of the exhibition, which is located on the wall along the railroad tracks on the way fr om the Kursky railway station to the CCA Winzavod and the Artplay Design Center.

With the exhibition Architecture of the Word of the NOWALLS street gallery, Winzavod, Artplay and Moskomarchitectura open a unique urban space for Moscow, Art Quarter, which unites two creative clusters.

The architecture of the word is an exhibition about communication, the city itself and its symbols.

The idea of ​​the exhibition was born fr om the graffiti culture, wh ere artists are called writers because it is assumed that they “write words”. Graffiti is a sign system that exists mainly for communication within the community. Over time, the language of graffiti has been transformed, evolved and supplemented with almost universal images and symbols. Artists went beyond the closed community and subculture and headed towards the central streets in order to establish a dialogue with the urban residents.

They achieved this through their art with the use of advertising, signboards and navigation signs. There are many examples when a word on a wall becomes part of the urban landscape adding new meaning to it like the well-known utterance WHY!

Today, street art is much more diverse in terms of its forms of expression than the simple writing of words: it includes urban poetry, as in the work of Kirill Kto, and a conceptual statement, as in Dima Retro’s works, geometric compositions by the artists of the Aesthetics art group or large-scale collages by Ivan Ninety.

Architecture of the Word is a metaphor for the construction of the world, the connections and interaction of people with the urban environment.

In this project, we mix the habitat and the subculture that actively develops in it, creating art in the place wh ere it has existed all this time in the form of tags: the wall along the railway tracks is already a favorite surface for graffiti writers. The unauthorized exhibition Trigger was held here.

Now this wall, or rather the fence, receives an official status: the NOWALLS Project (in Russian the name of the project is a palindrome, it was invented by the artist Ivan Simonov). NOWALLS is a project about art without frames, imposed themes or custom-made paintings, a bridge between the artist and the city, the artist and the viewer, art and vandalism.

Letters like houses are integrated into the city, making up the Architecture of the word. Artists speak to us and we do not pass by. This is our city, one big house.

The project was created by the Winzavod Contemporary Art Support Fund, the Artplay Design Center and the Moscow Architecture Committee with the support of Russian Railways. The exhibition is dedicated to the 30th anniversary of the Moscow Committee for Architecture. 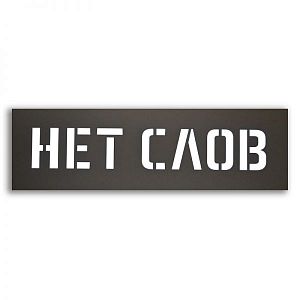 Free
6 U Contemporary
All events